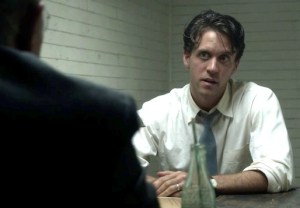 Might the loose lips in danger of sinking Manhattan‘s ship belong to Charlie?

Occam certainly thinks so, as you’ll see in this exclusive sneak peek at the WGN America drama’s season finale.

In the episode airing Sunday (10/9c), Dr. Isaacs is made to undergo some intense questioning regarding the potential leak of information to Russia.

“You have lied since the moment you set foot in this room!” Occam yells at the young scientist.

According to the official episode synopsis, Charlie “faces a decision that could mean either the ultimate sacrifice — or the ultimate betrayal.” Hmm… maybe that has something to do with the way Abby’s name is brought up at the end of the clip?

Press PLAY on the video below to watch it all go down.