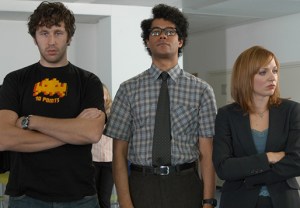 Bill Lawrence is in with The IT Crowd.

The Cougar Town creator is shepherding a pilot adaptation of the popular British comedy for NBC, our sister site Deadline reports, with Community‘s Neil Goldman and Garrett Donovan on board to write and executive-produce with Lawrence. Additional EPs include Jeff Ingold and Craig Cegielski.

As its title suggests, The IT Crowd follows the exploits of a British company’s information-technology department.

* On The Mentalist, M.C. Gainey (Lost) and Tangie Ambrose (In Plain Sight) will reprise their roles as Pete and Sam Barsocky in Episode 9 of the upcoming season.

* Adewale Akinnuoye-Agbaje — better known to Lost fans as Mr. Eko — will appear in the upcoming fifth season of HBO’s Game of Thrones, according to The Hollywood Reporter. His character, Malko, is not featured in any of George R. R. Martin’s novels.

* Bravo has released an extended trailer for Girlfriends’ Guide to Divorce its first-ever scripted drama starring House‘s Lisa Edelstein. If you’re a fan of threesomes, younger men and vibrators being mistaken for light sabers, you’ll probably love it: