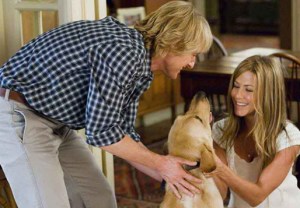 The network has given a put-pilot commitment to a single-camera comedy based on the 2008 Jennifer Aniston/Owen Wilson movie Marley & Me, our sister site Deadline reports.

RELATED Report: Bewitched Remake In the Works — Who Should Play Samantha?

Penned by Jenny Bicks (Sex and the City) and directed by the film’s director David Frankel, NBC’s Marley pilot reportedly picks up where the movie left off, with John and Jenny Grogan moving back to Florida with their three children.

Considering Marley died at the end of the movie — sorry, spoiler alert! — you might be asking yourself, “How could this new series possibly be considered a sequel?” Don’t worry, NBC has an answer; the Grogans apparently take in a stray dog, and because they give it Marley’s old tag and collar, they decide to also name it after their late pal.

So now we have two questions: First, why would a family ever name its new dog after its old, dead one? And second, would you watch this show? Drop a comment with your many, sordid thoughts below.