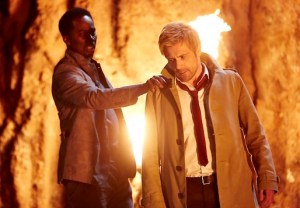 Most people would be happy to have an angel watching over their shoulder.

Most people are not Constantine.

But Constantine’s not happy to see the winged one, and he’s even less pleased to hear about Manny’s mission.

The new series, based on the DC comic, follows Ryan’s tortured character as he fights evil, helps those in need and battles his own demons.

Press PLAY to watch the sneak peek of the series premiere — which airs Friday at 10/9c on NBC — then hit the comments with your early thoughts on the trenchcoated crusader.