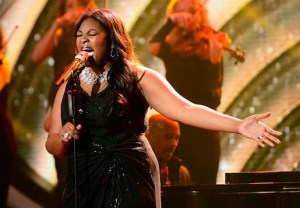 You may never have Jenny From the Block’s booty or bankroll, but you can now experience some of her power. Thanks to a new American Idol initiative, fans will be able to vote a contestant through to Hollywood Week via online poll.

Season 14’s “America’s Choice” will pit four hopefuls against one another for a chance at a coveted Golden Ticket.

Audition videos from Emily Clarie Shlesinger, Kay Leon, Raven Symone Basden and Tyler Clark can be found at americanidol.com/poll — with voting open until 11:59pm PT on Tuesday, Oct. 21. In addition to the poll on the American Idol site, viewers can also cast ballots using hashtags on Facebook and Twitter.

Fans may vote for a maximum of one video per day per platform per account ID during the voting period.

Who’s getting your Golden Ticket to Hollywood? And should the erstwhile star of That’s So Raven be concerned about the exclusivity of her moniker? Sound off below!