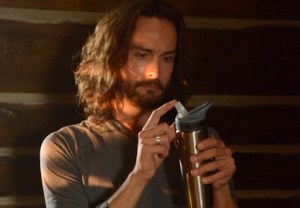 Fox recently released photos from Sleepy Hollow‘s Oct. 27 episode (Fox, 9/8c), an hour titled “And the Abyss Gazes Back,” and we think you’ll be quite interested in one shot in particular: that of Ichabod Crane, Continental soldier and biblically ordained Witness, getting his om on.

Also of note: During his exploration of yoga, Ich seems to ditch his 18th-century garb for some down-dog appropriate yoga pants and tee shirt. (Though this change is probably temporary, doesn’t the idea of him browsing a Lululemon tickle you just a little?)

Showrunner Mark Goffman recently told TVLine that Crane’s interaction with the ancient mind-body practice “is gonna be great” and hinted that perhaps Ichabod has already been introduced to the discipline, because “Yoga’s actually been around for so long.”

Elsewhere in the gallery: We meet Sheriff Corbin’s son (played by Zach Appleman, who bears such a resemblance to Clancy Brown that executive producer Len Wiseman thought they were related); Jenny and Abbie look on as Ichabod studies an intriguing bottle, and Henry looks incredibly perturbed.

Click through the gallery below to see Ichabod in action.