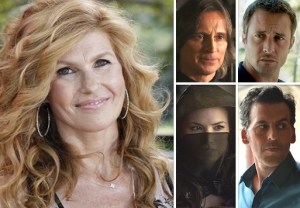 Will Nashville pit Rayna versus Luke? How will Five-0 mark the big 1-0-0? How does Once Upon a Time‘s Rumple know the Snow Queen? Is a Grimm romance doomed? Read on for answers to those questions plus teases from other shows.

Nashville scoop, please! — Molly
I hear that Rayna and Luke are going to compete against each other at this year’s CMAs — that’ll make for some awkward pillow talk — and Teddy will find love in the wrong place. Follow-up: Has Teddy ever found love in the right place?

Hi Matt, can you please tell us something about Hawaii Five-0‘s 100th episode? –Mary
You mean in addition to alll this scoop I served up in August? Well, the milestone hour — this season’s seventh – is titled “Inā Paha,” and in it Five-0 must find McGarrett when he is kidnapped by Wo Fat. As the drama plays out, we will witness what might have happened to the team if they had taken very different path. Oh, and musician Gavin Rossdale guest-stars as “the nefarious Johnny Moreau.”

I was hoping you had some scoop on the rest of this season of Covert Affairs. If it could be about Eyal’s role, then all the better! –Michelle
Oded Fehr’s Eyal resurfaces in Episode 11 (titled “Trigger Cut” and airing Nov. 6), when Annie heads on a reconnaissance mission in Istanbul, while McQuaid’s health hangs in the balance. In that same midseason opener, Arthur takes the reins at McQuaid Security and Calder recruits a surprising new asset.

Things between Grimm’s Nick and Juliette ended very intensely last season. Any clue if they will be OK? — Theo 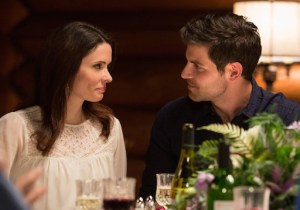 “OK” is actually a very accurate of the Nick-Juliette relationship at the start of Season 4. The couple isn’t in a great place, what with Nick sleeping with Adalind and subsequently losing his powers, but Juliette is doing her best to be a supportive girlfriend. That said, she does make a trip to the Spice Shop at one point in the first few episodes to put a subtle, yet firm, kibosh on Monroe and Rosalee’s efforts to restore Nick’s Grimm-ness. Make of that what you will.

Trust me when I say that I am holding the Dark One’s dagger and command you to give us something on Once Upon a Time‘s Rumplestiltskin that isn’t Belle-related! –Christina
Right, as if the dagger would… OK, here you go! During our visit to the Once set this week, Robert Carlyle teased Rumple’s ties to Elizabeth Mitchell’s Snow Queen, saying, “A lot of these magical characters, Rumple has either trained or helped in some way. He hasn’t exactly trained her, but he’s helped her along the way. So there’s deep, deep history there, but it’s a really strange relationship. They’re very, very dangerous to each other [and] both slightly afraid of each other, I think.”

Will Once Upon a Time’s Elsa get out of that blue dress and into new clothes? –Lindsay
I’m betting on no. For one, Georgina Haig was in said costume when we saw her on set. And two, I could imagine Disney having an issue with Once drastically altering the appearance of a current movie franchise character/golden goose.

Anything new on Castle? – Sam
Episode 9, “titled “Role of a Lifetime,” revolves around the murder of a Stallone-like action-movie headliner, with the persons of interest including the vic’s onetime co-star, his Brigitte Nielsen-esque wife, and their club promoter son.

Are there any past characters coming back to Arrow in Season 3? Along the lines of Kelly Hu’s China White? –Alamin
As you may have heard, Katrina Law will soon return as Nyssa al-Ghul, and given what happened to her lover Sara, the LOA badass “absolutely” has some bones to pick, Katie Cassidy told me. “You will see [Nyssa go through] a wide range of emotions,” Cassidy previewed, “but ultimately, through the resentment and negativity, youll get a chance to see [her and Laurel] sort of come to understanding.” 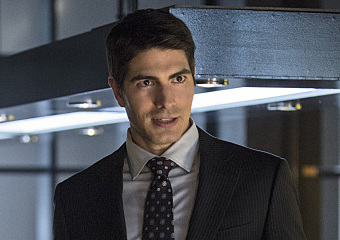 Ray Palmer be turning into The Atom or not? –Bill
“Anything is possible,” showrunner Marc Guggenheim allows, before adding: “My instinct is if Ray Palmer is going to shrink he’ll probably shrink on another show. With The Flash in existence, there’s no compelling reason for us to do superpowers on Arrow.” That said, the EP teases, “We have plans for Ray that don’t involve shrinking but are actually really cool.”

Any Beauty and the Beast info you can reveal? Maybe who has been cast as Detective Harris? –Stephanie
Brandon Gill (of CBS’ Golden Boy) will debut in Episode 305 as – name change alert! — Detective Wesley Atchison, Cat’s new partner. Being his first day of the job and all, Wes is eager to work with an accomplished detective such as Ms. Chandler.

I’m not ashamed to admit this is a very shallow question, but: Is there any way that NCIS’ Jake could be from Oklahoma by way of London? I know that Jamie Bamber also plays characters who are not British, but that accent… sigh. –Andrea
Many a reader has echoed your sentiment/sigh/wish, Andrea, but I’ve confirmed that Bishop’s husband is American, so no accent for you.

Is William Petersen no longer an executive producer on CSI? I did not see his name in this week’s credits. –Lisa
1) Congrats on still looking at credits! A rare skill in today’s DVR-ified, FF-friendly world. And 2), I asked around and Petersen is in fact still an EP.

In the first episode of DirecTV’s Kingdom, 24 minutes in, a song starts — do you know name and artist? –Amy
That tune was titled “Heart,” by the band is OurLives.

What Dr. Wells said on The Flash has me wondering: Do we have any idea how far into the future it will be before Barry starts being called “The Flash”? –Susan
I reckon that, as with “The Hood”/Arrow, it’s a ways away. And Jesse L. Martin confirmed as much, telling us, “They stick with [‘The Red Streak’] for a while.” BONUS SCOOP: In Episode 12, we’ll meet Clay Parker, an Iron Heights escapee who leans on his girlfriend to use her metahuman skills in the name of “one last heist.”

Anything on either of my favorite 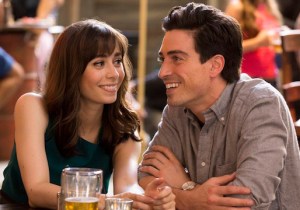 new comedies, Selfie or A to Z? –CLO
I choose Column B, if only because I have Ben Feldman and Cristin Milioti raving about next week’s episode AKA their mutual favorite-to-date. “There’s a moment where I meet Zelda’s family way too soon — at least in my opinion, way too soon — which is one of the most fun and coolest things that we’ve shot,” Feldman says. And along the way, Milioti notes, “You also find out so much about Zelda.” Mindy Sterling (Austin Powers) and Toby Huss (Halt and Catch Fire) guest as Zelda’s aunt and uncle.

I really enjoy Gotham, but I’m confused. What era is the show in? It’s about young Bruce Wayne, therefore, the cars should be older — which they seem to be most of the time. That being said, why are there cell phones? –James
This has been covered, but it’s worth repeating. As show boss Bruno Heller has said of the seemingly incongruous temporal cues, “It’s a mash-up, to use the modern phrase… a kind of timeless world. It’s yesterday, it’s today and it’s tomorrow all at the same time, because that’s the world that dreams live in.”

Do you have any scoop on either of these new Vampire Diaries and The Originals characters, Annie Nelson or Scarlett? –lilslim
I choose Door No. 1! A photography student whose life will be turned upside-down as she unravels the mystery of her true parentage, TVD’s Annie also seems headed for romance – with a fella who perhaps shares a name with yours truly.

After watching the pilot of The Affair, I’m very interested in this show. Do you have some scoop on it? –Ilona
If you’re wondering about those ominous flash-forwards at the cop shop, allow Joshua Jackson to make you wonder even more. “Act 1 of the affair will sort of come to its conclusion at the end of the first season,” he shared with us. “But the story that’s being told from the far future will play throughout the course of the series, if there is to be more seasons.” (And alas, that may be a big if.)

Real questions, real answers. If you need the Inside Line on a favorite show, email InsideLine@tvline.com! (With reporting by Vlada Gelman and Kim Roots)