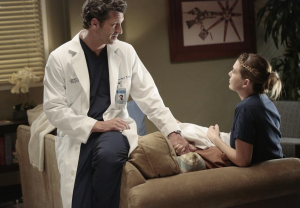 In this week’s bittersweet, flashback-filled Grey’s Anatomy, one doctor quit, one was rehired, and Derek said seven words to Meredith that, if I were her, I wouldn’t let him live down for a long time: “Wow… you sound just like your mother.” Nonetheless, the hour still managed to end on a positive note. Here’s how:

DISS AND TELL | After Stephanie heard from Miranda that the board had voted unanimously for her to take Cristina’s seat, the resident blabbed to Alex, who, feeling understandably betrayed, confronted Mer and Arizona. “You would make a fine board member,” Mer insisted. “But Bailey will make an exceptional one.” (Ouch.)

For her part, Arizona said that she lied to Alex about it having been a close vote out of fear that, if he knew the truth, he wouldn’t have agreed to come back to Grey Sloan as a peds surgery attending. And, she added, she really needed him to come back and do everything that she can’t while she’s both at Herman’s beck and call and trying to keep her marriage afloat. Finally, he was like, okay, whatever — but noted that he should be making a lot more money.

THE BICKERSONS | Meanwhile, Mer and Derek continued their fight from last week, with her suggesting that, since he “martyred” himself by staying in Seattle, he’s just been waiting for her to fail and him insisting that, on the contrary, he’s just been waiting for her to shine. And, of course, instead of explaining why she called in sick to drink tequila at Alex’s, Mer yelled at Derek to call the president, get his job back and leave. (Great doctors? Sure. Great communicators? Hell, no!) Luckily, Derek would soon find out what his wife was too ticked off to confide in him…

QUICK TURNAROUND | Off Richard’s confession last week that he’s her father, Maggie tendered her resignation, leading to hospitalwide choruses of “We can’t let her go!” Determined to change the newbie’s mind, Amelia paired Derek with his secret half sister-in-law in surgery. At first, Maggie still wouldn’t disclose why she was really leaving. “Every time I do,” she marveled, “it just gets worse.” But at last, she did reveal to Derek her family ties to Mer and Richard, and he reacted the way she’d wished Mer had: with excitement and an embrace. “Meredith is terrible with sisters,” he explained. “I’m not.” Then, the hug went on a little too long and got amusingly awkward. Still, things were clearly about to be set right.

Elsewhere, Richard admitted to Miranda why he couldn’t be the one to convince Maggie not to pack it in. Bailey’s priceless reaction? “Oh, thank you, God! I thought you had sex with that girl!” Richard also admitted to Mer what she couldn’t quite recall about that fateful day at the carousel when she was 5: Jealous of Ellis’ Harper Avery nomination — and fearful that he’d go through his entire life envious of her — he aborted their plan to leave their spouses and instead ended their affair (leading to Ellis’ suicide attempt). In short, “I made the wrong choice for the wrong reason,” he said sadly.

BOND… LET’S BOND | Finally, Derek got Mer to agree to a truce long enough to talk to him, and in turn, Mer shared with Maggie their mother’s journal from the spring of ’83 (which she got from Richard). And while the entries weren’t exactly warm — Ellis “wasn’t, either,” Mer noted — the wineglass stains on the pages did stop around the time that Ellis would have learned she was pregnant. So Mer was able to show Maggie at least that their mother had tried, in her way — she had wanted Maggie to be healthy.

As the half sibs tentatively bonded for the first time, Richard watched from a distance, smiling. It might not be the happy ending he and that fractured family could have had, but hey, it was something.

OK, your turn. What did you think of the episode? Were you surprised Alex forgave Arizona so quickly? Relieved that now maybe Mer and Maggie won’t be at each other’s throats every week? Hit the comments!