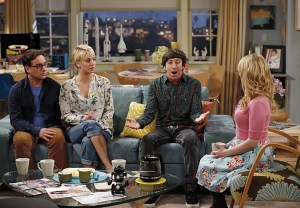 The floodgates have officially opened.

Just a day after HBO unveiled plans for a Netflix-style Internet-only subscription service, CBS announced Thursday that it too is launching an on-demand streaming offshoot called CBS All Access.

For $5.99 per month, subscribers will have access to thousands of CBS episodes from the current season (with fresh episodes available the day after broadcast) as well as previous seasons.

Thousands of epsidoes from classic shows (including Star Trek, Twin Peaks and Cheers) also are ripe for bingeing.

CBS All Access is available now at CBS.com and on mobile devices through the CBS App for iOS and Android.

“CBS All Access is another key step in the Company’s long-standing strategy of monetizing our local and national content in the ways that viewers want it,” said Leslie Moonves, President and CEO, CBS Corporation, in a statement. “This new subscription service will deliver the most of CBS to our biggest fans while being additive to the overall ecosystem. Across the board, we continue to capitalize on technological advances that help consumers engage with our world-class programming, and we look forward to serving our viewers in this new and exciting way.”