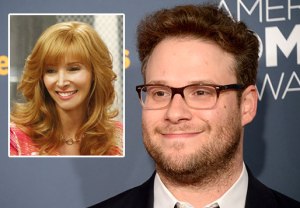 Valerie Cherish’s biggest rival is making a Comeback, and Seth Rogen’s got something to do with it.

Rogen will appear in two episodes as himself, where — patience here, because this is a bit confusing — he will portray a fictional version of Valerie’s showbiz nemesis Paulie G. in a new HBO series written by Paulie G. himself (played by Lance Barber). Valerie will also star in the show-within-a-show, titled Seeing Red, playing an exaggerated version of herself named Mallory Church.

RELATED The Comeback Season 2: Scoop on the New DNA, Guest Stars and… a Season 3

Thoughts on Rogen’s casting? Drop ’em in the comments section below.