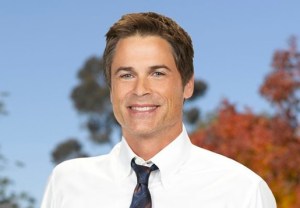 Rob Lowe‘s vacation from NBC may not last that long, after all.

The Parks and Recreation actor will lead a comedy pilot about a newly sober narcissist whose decision to be a good parent doesn’t come until his kids are teens, our sister site Deadline reports.

The potential NBC comedy follows Lowe’s character, who dries out and returns to his hometown to issue mea culpas to his son and daughter, as well as to his ex-wife and her new family.

The part was written for the West Wing vet, who partnered with the project’s writers/executive producers — Pete Huyck and Alex Gregory (Late Show With David Letterman) — last year on The Pro, another comedy pilot that was not chosen to proceed to series.