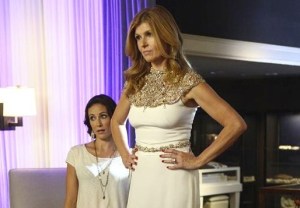 They’ve got no angst. No trauma. No drunken arguments, throwing of rings or hate-banging of backup singers — just two fun ladies, acting sassy toward the paparazzi and singing a duet on stage in front of thousands of people.

Y’know, like my best girlfriends and I do on the average Friday night.

In fact, why not ditch all of the dudes in Music City — at least temporarily — so we can watch these two hot mamas be awesome and make music and have shiny hair. Hell, move Sadie and sad, sad Juliette into that huge house of Rayna’s and call it Sister Wives Without the Guy. Who’s with me?

Speaking of Juliette, what the hell happened to Glenn’s head? Eh, we’ll get to that in a few minutes. Read on for what happened in “I Feel Sorry for Me.”

NEW GIRL | Armed with the knowledge that Juliette’s pregnancy probably means she won’t put out an album anytime soon, Rayna starts pursuing Sadie Stone as a potential Highway 65 artist. Ray makes a strong case for her fledgling label, but Sadie’s also got an offer on the table from Edgehill, so she asks for some time to think about it. Rayna’s schedule is packed, so Sadie tags along as Rayna tries on a wedding dress she had shipped in from Paris. (Side note: I know you all hated the gown when you saw it in photos, but I didn’t think it was that bad in action. Log your second takes in the comments, fashion police!)

They’re having a ball until the paparazzi — the dreaded Nashville paparazzi! They must be the ones who get all of those embarrassing photos of Emmylou Harris I always see in the gossip rags — swarm Rayna’s car, forcing the ladies to hop in Sadie’s ride and take a wild cruise through the city. There’s laughing, there’s singing along to the radio; it’s basically the first two thirds of Thelma & Louise in miniature.

RAYNA AND SADIE DUET | But even after all this mutual girl-crushing, Sadie decides to go with Edgehill, thinking it will make her the next Rayna. So Ray shows up to Sadie’s show that night, plays the girl-power angle real hard and promises that Jeff Fordham only loves big hat country artists and he will forget about Sadie the moment he signs her. Guess what, Jeff? Sadie just merged onto Highway 65, and she’s not looking back! (Side note: I laughed out loud at the “I did not see that coming!” gesture Oliver Hudson did in the wings.)

Sadie and Rayna sing a victory duet  — Sadie’s “Gasoline and Matches,” which is a pretty catchy tune — to a very enthusiastic Ryman crowd. But later, Jeff makes it clear that he’s going to play dirty: He’s going to try to sign Maddie and Daphne to Edgehill by wining and dining Teddy. (Raise your hand if you are even minutely worried that this will happen. Yeah, me neither.)

STORK ALERT | Juliette lands the lead in the Patsy Cline movie (yay!) and finally confesses to Emily and Glenn that she’s pregnant (yay!), but is seriously deluding herself when she thinks that she can film the movie and finish her tour without anyone noticing her burgeoning baby bump (boo). Also, in what world would you be able to give up a baby for adoption, Juju, without anyone noticing?

The entire problem looks like it might be solved when Juliette begins to cramp and bleed, calling Rayna in a panic. (Side note: Aww. I loved that. If Glenn is, as he mentions in the episode, basically Juliette’s father, Rayna is definitely her mom.) But no, the doc says everything’s fine. Fetus: 1. Juliette’s mindset: 0. Juliette’s lipstick, however? 10.

Glenn is troubled by the whole situation and tries to talk her into telling Avery, but she digs in her heels. She snarks that he should be pleased, because her career will continue uninterrupted, and therefore so will his job. “I want you to be happy!” he says, which is so sad, but it’s actually Juliette who nearly ends me when she tears up and says, “It kills me to disappoint you.”

RELATED Who’s In? Who’s Out? Your Guide to 100+ Casting Moves

I GO OUT DRINKIN’ AFTER MIDNIGHT | Wait — there’s more Glenn/Juliette angst ahead. But first, we’ve got to deal with Alcoholic Avery, who ignores Gunnar’s efforts to help him, ruins Zoey’s going-on-tour party (actually, who are we kidding? That thing was doomed from the start) and then gets arrested for passing out in a stranger’s car. The only phone number Avery knows by heart is Juliette’s, but when she comes to bail him out, he pays her back by saying the most terrible things one ex can say to another.

“I can’t love you, and I can’t hate you, because it’s ruining my life,” he sobs. “I need to nothing you.” And then he walks away from her, saying, “I wish I’d never met you.” Oof. Also, I have a little note for the young gents on this show: Why, when your hearts are broken, do you eschew showers? Remember when Gunnar’s brother died and Gunny didn’t wash his hair for an entire sweeps period? Avery’s coming in a close, greasy second here. Boys, let me introduce you to the concept of crying in the shower. You get clean while your soul slowly leaks out of your eyes and slips down the drain! It’s a multitasker’s dream!

Anyway, Ju winds up at Glenn’s house in the middle of the night, where she cries into his shoulder and… wait a tick, WHERE IS GLENN’S HAIR? I feel like this scene could be really moving if I could focus on anything other than the fact that Ed Amatrudo performs without the hairpiece he normally wears AND NO MENTION IS MADE OF THAT FACT. Like, at all.

LEFT BEHIND | Deacon and Pam have a love-hate thing going on, which means that we have to see them snipe at each other before they do it on top of some truck stop washing machines. That spin-cycle lovin’ gets them ditched by the tour buses, so Deacon buys a motorcycle and they catch up. I’m not feeling Pam, though she has a lovely voice, but I suppose even dear Deacon needs a distraction every once in a while, no?

Now it’s your turn. We’re not even going to get into that Bluebird freak-out, Scarlett, because I just can’t with you right now. (And when I use Internet shorthand, young lady, you know I’m angry.) Did you miss Will and Layla’s Real Time Carnival of Sadness (working title)? Do you care that Jeff used to be a musician? Sound off in the comments!