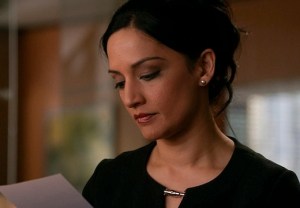 The Good Wife without the tough, resourceful and mysteriously sexy Kalinda Sharma?

It sounds almost inconceivable — yet it will be the new reality for CBS’ acclaimed drama now that Emmy winner Archie Panjabi has announced her intention to exit the series at the end of the current sixth season.

Yet as Panjabi plots her next move — she’s signed a deal with 20th Century Fox TV to headline a potential drama pilot for the 2015-16 TV season — Good Wife showrunners Robert and Michelle King will have to figure out a way for Kalinda to exit, if not gracefully, then at least dramatically.

With that in mind, we’ve brainstormed 11 potential exit strategies for Kalinda — from the logical to the downright whimsical.

Click through the gallery below for our thoughts, then hit the comments and tell us how you envision The Lady Sharma’s sendoff.