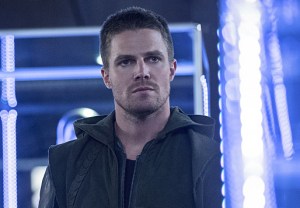 That’s the thing about dwelling in caves — it’s dark.

Arrow‘s Oliver discussed that dilemma this week with both Felicity and Diggle, as everyone close to Sara struggled to process her shocking, mysterious death.

Laurel of course is out for blood, clawing for answers about her sister’s murder. So when a lead lands her at the hospital bedside of someone else seemingly targeted by Sara’s killer, she crosses a line or two to procure intel from the already injured man.

Oliver, too, wants answers, and Diggle assures his friend that he will very much be there at his side to get them. To that end, Dig uses Lyla’s connections to tap into an A.R.G.U.S. database to work the case. But through it all, Oliver stands gut-punched but stoic, prompting the aforementioned heart-to-heart with Felicity.

Upon beseeching his best gal to bring “her A game,” Felicity reports, “I don’t have it!,” crestfallen as she is — as anyone should be — by Sara’s brutal murder. To that end, she asks Oliver, “How can you stand there, being so cold and rational…?” Oliver makes a fair point, that he doesn’t have the luxury of falling to pieces when everyone is looking for him to lead. “If I grieve, nobody else gets to.”

Felicity, though, isn’t terribly moved by his fatalistic credo, announcing, “I won’t wait in this cave to die. There is more to life than this.”

After giving Sara the closest thing possible to a proper funeral, Oliver comes around to a version of that thinking, admitting to Diggle — who’s back on Team Arrow until Sara’s killer is found — “I don’t want to die down here” in the foundry. Dig’s answer: “So don’t.”

* In flashbacks, Amanda Waller via Maseo tasks Oliver with taking someone out — and that person turns out to be Tommy Merlyn. Seems that Ollie’s BFF got wind that someone accessed “dead” Oliver’s email from a Hong Kong location. Oliver of course begs off the assignment, so he and Maseo work out a compromise, in which Oliver kidnaps Tommy and, whilst disguised, convinces him that A) Oliver is “rotting at the bottom of the ocean,” and B) Tommy was the victim of a kidnapping for ransom, thus throwing him off the scent.

* In mulling mortality and the importance of loved ones, everyone decides, “Hey, it’s time to track down Thea,” prompting Roy to share with Oliver the “Dear John” letter he received in the Season 2 finale, in which Thea vows never to return. And at episode’s end, we see exactly what Ms. Queen has been up to, training in martial arts under the supervision of “Dad” aka Malcolm Merlyn.

* Ray Palmer spends big bucks to buy the Tech Village chain, so that Felicity will need to work for him one way or another — but instead, she outright quits. But in keeping with the “Get more out of life” motto she later adopts, she ultimately returns to QE and her new (and compassionate) boss.

* Though she comes close, Laurel can’t quite bring herself to telling her “fragile” father what happened to Sara. What might possibly be the dramatic payoff of this conspicuous procrastination?

* Can we get a deleted scene of Diggle discussing with Lyla the idea to name their baby after his scantily clad, blonde colleague?

* What’s cooler: Dueling archers on motorcycles, Oliver pitching himself out a window while simultaneously shooting a “batarang” arrow into the sky, or catching your opponent’s arrow and turning around to shoot it back into him?

What did you think of Season 3, Episode 2?