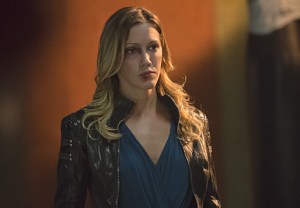 The CW’s Arrow with its Season 3 premiere sent many a viewer’s jaw dropping off that very same roof, as Laurel Lance’s sister Sara was ambushed by an unseen archer, and sent plummeting to a grisly fate. The aftershock of that event will propel Laurel herself on a journey, one fueled by vengeful rage and leading her to a man who is poised to play a significant role in reshaping her for a dynamic destiny.

Katie Cassidy spoke with TVLine about the “huge” role Sara will continue to play in Laurel’s life, as Team Arrow finds itself down one Black Canary… and very likely fated to one day recruit another.

TVLINE | At the time you and Caity Lotz filmed the Season 2 finale, did you know that there was an even bigger goodbye scene coming up in the premiere?
What makes you think it’s a final goodbye…?

TVLINE | Well, Sara got shot up with a bunch of arrows and fell from a roof….
It’s television, maybe she’s still alive! [Laughs] But having said that, no, we definitely did not know that that was going to be in the season opener. The one thing I will say about our show, which is great, is that Sara is very much a huge part of Season 3. She drives Laurel, she is inspirational for her. She motivates her. There are plenty of reasons why Laurel does some of the things she does in Season 3 are encouraged by her sister.

TVLINE | What gamut of emotions will we see Laurel go through starting this week?
As though we didn’t see enough of this in Season 2, it’s a hard season for her. She gets angry, she wants to get revenge somehow…. You’ll see her kind of dig deep and come out on top. 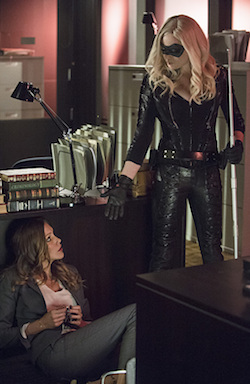 We’ve always seen her be very driven, and you’ll continue to see that quality in her. She’s very, very strong, and she’s a fighter, so we’ll continue to explore that.

TVLINE | Is there anyone she goes through this process with, or does she peel off to grieve on her own?
Laurel and Ted Grant (an ex-boxer/gym owner played by Emily Owens’ J.R. Ramirez) have interactions. He is definitely a part of her journey. He can see the potential that she has, and wants to help her evolve and grow and emerge. I’ve actually personally been training, and it is so much fun.

TVLINE | I know, I’ve seen the progress reports you’ve shared on Instagram. One photo even tweeted could be a “spoiler.”
Yeah! My boxing trainer, he doesn’t go easy on me. Our stunt coordinator, James Bamford, was like, “Treat her like a fighter, but don’t hit her in the face.” So when I go, he’s very hard on me, but that’s good because that’s how I am. I give 110 percent, and Laurel is the same way. She has this rage and this anger, and starting to train with Ted Grant is therapeutic for her.

TVLINE | Do you feel like your strength training helps you, or will help you, pull off the more physical, action-oriented sequences?
One-hundred percent. I actually had this conversation with our producers this week, Marc [Guggenheim] and Andrew [Kreisberg]. I am proud to say that in a scene — I can’t tell you which one — you’ll see Laurel training, and they didn’t have to use my stunt double, because I worked really hard at what I was doing. I wanted it to be legitimate, I wanted it to be me. So they let me do it. And aside from that, I literally just texted my producer to tell him that I was able to do something — I can’t tell you what, exactly — and he was like, “No way!” My response was, “The Arrow’s got nothin’ on me!” [Laughs] It’s crazy.

TVLINE | We’ve talked in the past about how losing Tommy rocked Laurel’s world and began nudging her in a certain direction. Will what happened to Sara be what finally propels her on this journey, to becoming Black Canary?
Absolutely. What happens to Sara, whether she lives or not, is a tragedy. In Season 2, we saw Laurel hit rock bottom; let’s hope that she doesn’t have to do it a second time. She will seek revenge, and that will motivate her to adopt more of that fighter/warrior mentality, and give her what it takes. Oliver is skeptical at first, but I think that he, hopefully, will come to respect her for it, and recognize that she has it.

TVLINE | You’ve played assorted young women of substance over the years, but Laurel is fated to be such a dynamically active character. Is that exciting to dive into as an actress?
I tend to gravitate towards these characters that are very strong — the very driven, modern-day woman — and I love that. It’s also a part of who I am in my nature, and I think I give that off. When I was 18 years old, my parents were like, “If you’re not going to go to college and you want to go to acting school and you want to move out, see ya! You’re on your own.” And as pissed as I was at the time, I really appreciate them for it now, because it taught me a lot about life. My grandmother is very stubborn, and she sort of taught me to be the same way! So, my family doing that lit a fire under me and made me work 10 times as hard.