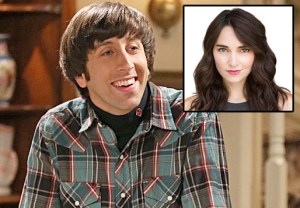 The Big Bang Theory is ratcheting up the tension between Howard and Stuart.

TVLine has learned exclusively that a November episode of CBS’ monster hit will find Stuart attending a party on the arm of Howard’s never-before-seen second cousin Jeanie (played by up-and-coming actress Kara Luiz).

And to answer your next question, yes, this is the same cousin Howard admitted to losing his virginity to in his Toyota Corolla.

Stuart’s latest salvo comes as he continues to live with Howard’s mother, an arrangement that has brought the frenemies to the brink of war.

Luiz, whose credits include Amazon’s Betas and MTV’s prank show Jerks with Cameras, will appear in this season’s seventh episode.

Big Bang, which is currently airing Mondays at 8/7c, is set to reclaim its Thursday-at-8/7c perch beginning Oct. 30.