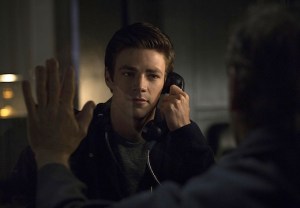 THE PERFORMANCE | He may not have leapt a tall building in a single bound, but Gustin’s performance in the pilot episode of The CW’s The Flash was pretty darn close to super-powered.

Despite having the hefty weight of a DC Comics legacy on his back, Gustin made it look effortless as his geeky crime-scene investigator Barry Allen transformed into the fastest man alive after a snafu involving a lightning bolt (generated by S.T.A.R. Labs’ malfunctioning particle accelerator) — and then embraced his destiny as the titular crime-fighter. Along the way, the actor nailed moments of whimsy, elation, heartbreak, fear and loss — all while exuding the kind of rare charisma upon which entire franchises can be built.

Gustin was particularly great in a scene at a deserted airport during which his S.T.A.R. cohorts put his new powers to the test. The twinkle in Barry’s eyes and his gleeful-kid smile as the world blurred by did as much as any special effect to transport viewers into the super-speed experience.

Later, though, when Barry paid a visit to his imprisoned father in jail and reaffirmed his belief in his innocence, Gustin’s vulnerable delivery served as a searing reminder not to dismiss him as “just” a CW/sci-fi/comic-book actor (labels that have infuriatingly held back everything from Battlestar Galactica to Buffy the Vampire Slayer to Orphan Black in their quest for awards-season kudos). The tears streaming down Barry’s face, the way he raised his hand to the plexiglass divider separating him from his dad, the palpable mix of affection and despair and resolve emanating from his core, all combined to make it the pilot’s most powerful interlude. And considering The Flash also shut down a tornado by zipping 700 mph in an opposing rotation, that’s no small accomplishment. 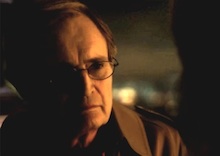 HONORABLE MENTION | As NCIS cast a spotlight on Dr. Donald “Ducky” Mallard, TV vet David McCallum seized the opportunity to bring new texture to the character he has played for 12 seasons. As flashbacks revealed a young Ducky’s tie to a person of interest in this week’s case, McCallum in the present made clear the doctor’s deep love for Maggie Clarke (Tyrant’s Alice Krige), an old friend who broke his heart long ago, and with whom he has reunited in London. When Ducky and Maggie are held captive by a killer, the doc uses a scalpel to nick the guy’s brachial artery, a crafty move that would make Illya Kuryakin proud. Later, as Maggie and Ducky reflect on what might/should have been, he produces the train ticket he bought for her all those years ago, only to go unused. A second chance at romance? “All I know,” Ducky tells his true love, “is that I would like to stand here with you a little longer, next to you, and maybe just not say anything.” All told, a moving example of how McCallum excels when interacting with, you know, live bodies. 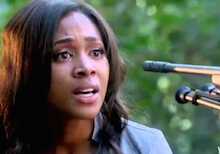 HONORABLE MENTION | Sleepy Hollow‘s Lt. Grace Abigail Mills prides herself on not losing her head — a tough task, given where she lives — and we’ve been fans of Nicole Beharie‘s take-charge, slightly aloof portrayal from the series’ start. Monday’s episode, though, allowed the actress to play up Abbie’s vulnerabilities, both while pleading with Jenny not to shoot Sheriff Reyes and later, while trying to process the information in her mother’s file. Without losing the fire that drives Abbie, Beharie softened beautifully as the weary “leftenant” realized that her unstable mom really had been trying to save her daughters from the darkness that stalked her. Consider, too, the artful way that Beharie has been playing Abbie’s clearly conflicted feelings about Katrina’s return, and we’ve got nothing but fist-bumps and apple pie for the woman behind the Witness.