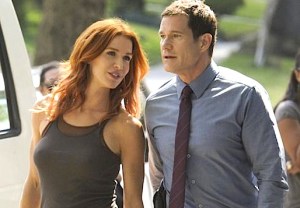 RELATED 2014 Renewal Scorecard: What’s Coming Back? What’s Getting Cancelled? What’s on the Bubble?

The network officially confirmed the news Friday, following the end of the drama’s third season on Sept. 14.

CBS famously cancelled the Poppy Montgomery procedural after its first season, only to reverse course and renew it for a second season.

The two-hour closer drew 6 million viewers and a 1.0 demo rating.

Will you miss Unforgettable? Drop a comment with your thoughts on the series’ cancellation below.