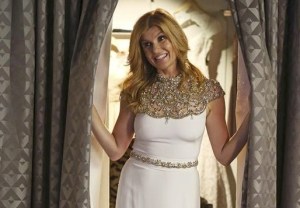 Nashville‘s Rayna Jaymes may have found the one.

Not the right guy, of course. (We all know he’s sullenly hooking up with brassy back-up singers while the love of his life plans a wedding to Luke “global brand” Wheeler.) We’re talking about the gown that the First Lady of Country Music is sporting in this new batch of photos from the ABC drama.

These new shots show Rayna and Sadie (Go On‘s Laura Benanti) acting wacky with curtains and getting chased by paparazzi in Episode 4, which is also where we see Ms. Jaymes trying on a heavily beaded white column dress that just may be a contender for her wedding gown.

Avery looks like he’s having much less fun in pics from Episode 5, where it appears that Glenn tosses him off the Patsy Cline movie set as a disapproving Noah (Dancing With the Stars‘ Derek Hough) looks on… and then shares some craft-services time with a bewigged Juliette.

Flip through the gallery below, then hit the comments with your thoughts on Rayna’s attire: Keep or kick to the curb?