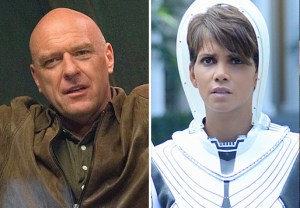 Two of CBS’ summertime dramas will be back for additional seasons.

The Eye network announced on Thursday that it has picked up the Stephen King-inspired Under the Dome for a third season, while the Steven Spielberg-produced, Halle Berry-fronted Extant will be back for Season 2.

With Live+7 DVR viewing factored in, Dome was the summer’s No. 1 scripted series, averaging 11 million viewers and a 2.7 rating.

RELATED Extant Finale Recap: This Boy Is on Fire

Extant premiered this past June to 9.6 million viewers and a 1.6 rating, but by its Sept. 17 finale — and following some schedule-shuffling — had slipped to 5.4 mil/1.0. TVLine readers gave the season as a whole a grade of “C+.”

Helping offset the two series’ pricetags, CBS has a deal with Amazon Prime — for a reported $900,000-per-episode, for each show — to be the exclusive home to streamed episodes.