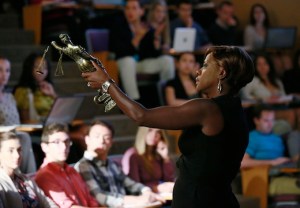 ABC might not be able to make Selfie happen — the Tuesday-night rom-com is pretty cute, though, despite its title — but this week’s How to Get Away With Murder showed us that the Kardashians’ favorite form of photography isn’t without some value.

Yep, the flash-fowards to our “Circle of Four” law students — Michaela, Connor, Wes and Lauren/Laurel — found ’em resorting to snapping candid pics around the giant campus bonfire (Laurel’s idea) as a way to establish an alibi for the killing of their law professor’s hubby. (Snap poll: Do we really think any of these four ambitious kids committed the actual homicide, or are they merely the cleanup crew? I vote the latter.)

If the quartet follows the formidable Annalise Keating’s lesson plan, though, the next few weeks ought to find them discrediting potential witnesses for the prosecution, establishing an alternate theory of the muder/possible new suspects, and then creating an avalanche of additional misleading evidence that would send any jury to the corner of Reasonable Ave. and Doubt Blvd.

In other news, Annalise’s Hot Detective Boyfriend investigates Sam’s whereabouts the night of Lila’s death, discovers the hunky professor wasn’t where he’d claimed to be, and then lies to Annalise and tells her he’s found no reason for suspicion. (What the whaaa?) And Annalise — who perhaps needs to double down on a “trust no one” life philosophy, at least for a spell — takes on as a new client one half of the duo accused of murdering Lila (AKA her hubby’s possible lover) (AKA possibly a campus drug dealer despite her family’s apparently unspeakable wealth). 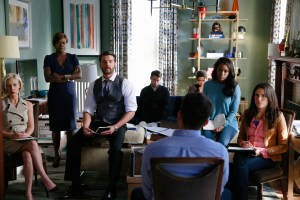 With sooooo much plot, let’s condense the action from this week’s episode into delicious bite-sized morsels:

CASE OF THE WEEK | Kind of a clunker, if you ask me, and a waste of the delectable Anna Ortiz (Ugly Betty, Devious Maids). In a nutshell, she plays a suburban mom picked up for polishing a sexy stranger’s immunity idol — if you catch my drift — in a public park, but two seconds after Annalise gets her released, the lady gets re-arrested. Turns out “Paula” is living under an assumed name — having been on the lam since skipping bail on a felony murder charge some 20 years ago. You see, “Elena” (the name on her first birth certificate) and her anti-globalization cronies set off a bomb and killed a janitor — but since the episode gives us no sense of “Elena’s” life prior to her arrest, the arc doesn’t really resonate emotionally. Girlfriend’s still pining for the group’s imprisoned ring-leader (Jason Gedrick), but after he unexpectedly rats her out on the stand (in exchange for early release), she flees Philly by bus — with Gedrick’s mastermind in a bus seat alongside her! Wait, the court didn’t even wait for the cops to put out an APB on Fugitive Terrorist Lady before letting her former lover skip out into the sunlight and head for parts unknown? I call baloney — and not the delicious kind you fry in a pan with sauteed onions and serve over Spaghetti-Os. The only riveting moment from the proceedings is when Elena — driving with Annalise, Michaela and Bonnie — talks about subsuming her passions for two decades, and having realized that despite the guise of domestic bliss with her husband and kids, she’d missed her imprisoned lover — and the thrill of fighting for a cause — every day. When Annalise tells Michaela at the close of the hour to “choose your husband carefully — you only have yourself to blame if it ends badly,” it seems as much a pep talk to herself as it is to her Tracy Flick-ian student. 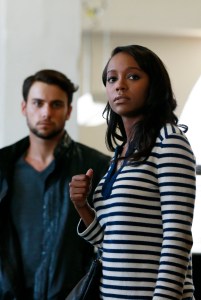 SAM’S BODY IN THE WOODS | Aside from our quartet establishing their alibi — the mania of Connor juxtaposed with the mortification of Michaela, plus his demand that she “smile or go to jail,” proves utterly perfect — the dimly lit, frantically edited subplot takes a few more turns. We see Rebecca was indeed in Annalise’s office along with our core quartet on the night Sam met his demise — so maybe she really is the one who inflicted the blunt-force trauma. Michaela loses her engagement ring somewhere between torching Sam’s corpse and heading back to the van. Oh, and making the backstory even juicier, we find out in the present that Michaela’s fiancé Aiden had sex with Connor back when they attended an all-boys boarding school. Connor has altogether too much fun with Michaela’s horrified reaction —”I hooked up with pretty much all the hot boys at boarding school, if it makes you feel better. Also, I barely remember what his penis looks like. Wait. No. I still do,” he oozes. But Michaela has plans to get married in bespoke Vera Wang, have one child, hire a cook and a nanny and conquer the world with Aiden. And so she accepts his explanation that he was merely a member of the Horny and Experimental Teenagers’ Club and not an applicant for the Future Down-Low Hubbys of America. Her threat to divorce him, take all his money and destroy his political aspirations is a really romantic kicker to her speech, too, no?

LILA’S MURDER INVESTIGATION | Wes impersonates an attorney to sneak into jail to see his wide-eyed (but not that innocent) neighbor Rebecca — but she wants no part of his assistance. Later, though, when a call comes in to the phone Rebecca had hidden in his bathroom floor, he answers it and discovers it’s actually Lila’s, and the caller seems to be looking to score some narcotics. The university, meanwhile, wants Annalise to take on the case of current student Griffin, Lila’s football player boyfriend, but she stalls for more time — first and foremost wanting to be certain her husband isn’t the killer. Yet while Det. Ab-rageous eases her suspicions about Sam, it’s another handsome fella who proves more persuasive. When Annalise has to bail out Wes from his fraudulent act, he tells her Rebecca is poor and helpless and needs to be championed. And Griffin’s frat-party alibi to Keating & Assoc — his DNA was under Lila’s nails because caught him having sex with Rebecca after the latter woman delivered cocaine to his frathouse — doesn’t exactly paint him as a pigskin-throwing charmer. She takes Rebecca’s case, then tells her students she’s banning “further discussion on Lila Stangard murder” — which seems somehow at odds with her entire teaching philosophy, no? Too bad by the time Annalise arrives at Police HQ, Rebecca has already confessed to Lila’s murder. “Got it all on tape, too,” smiles the self-satisfied detective.

Silly lady, didn’t she hear that pride goeth before a fall? And that goes double when you’re up against Annalise Keating.

* Was Bonnie up to something more nefarious than looking for high-carb snacks when Sam walked in on her in the kitchen?

* Did we miss fun sexytimes between Connor and his tech-geek boyfriend?

* Did Nate lie about Sam just so Annalise will stop showing outside the house where his ailing wife is hunkered down?

* How did I not realize that Frank isn’t a lawyer? (Bonnie still has to be one, obviously, no?)

On that note, I turn it over to you. What did you think of Episode 3 of How to Get Away With Murder? Were you a little let down by the case of the week? And is Aiden perhaps a little more into the fellas than he’s letting on? Sound off below!