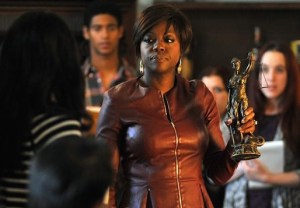 ABC is the first network out of the gate to grant full-season orders to new fall series — starting off with How to Get Away With Murder and black-ish.

VIDEO How to Get Away With Murder Sneak Peek: Michaela’s Fiancé Knows [Spoiler]!

Murder‘s freshman run, as it always was envisioned/designed, will thus last 15 episodes, while black-ish will run for the typical 22.

ABC’s black-ish also bowed with big numbers — 11 mil/3.3, AKA the fall’s top new comedy — and then dipped in its second outing. This week, the comedy rebounded some (to 8.3 mil/2.9), and it still enjoys strong retention out of Modern Family.

Which new series do you think will be next to get a full-season pick-up?