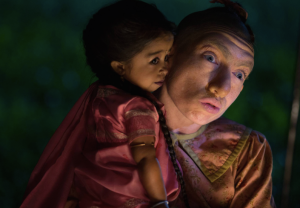 Based on the premiere of Freak Show, Jessica Lange wasn’t just towing the company line when she said that this season of American Horror Story could well be its best yet. The first hour — which took us to Jupiter, Fla., in 1952 to ask who really are the “Monsters Among Us,” the freaks or those who misjudge them? — was stylish, shocking and irresistibly over the (big) top!

DOUBLE VISION | Over the course of the episode, dueling diary entries offered us the very different perspectives of Sarah Paulson’s conjoined twins, Bette and Dot Tattler, who, after murdering their (over?) protective mother, were recruited by Fraulein Elsa’s Cabinet of Curiosities. On one hand, movie buff Bette was thrilled — she saw Elsa (Lange) as a glamorous savior. On the other, repressed Dot was horrified — she likened their joining the carnival to entering the gates of hell. (In fairness to the grump, she did have a point: They couldn’t enter the fairgrounds without passing through Satan’s mouth.) But even Dot eventually found something to like about their new lot in life: lobster boy Jimmy (Evan Peters, at his most adorable). Not only did she flash a rare smile when he winked at her, but she fully committed to her new “family” after he slit the throat of the cop who showed up to arrest her and Bette. (And they say chivalry is dead.)

A STAR IS REBORN | As for Elsa, Fraulein Mars quickly established herself as a daring fashion plate (rocking, among other get-ups, an outré outfit that appeared to be stolen from Cruella de Vil’s closet and made primarily of Afghan Hound hair), a shrewd businesswoman (able to get an eviction notice forgotten using nothing more than her skivvies and a bottle of schnapps) and, sadly, a star that never rose. Following a dazzling performance of Bowie’s “Life on Mars,” the Dietrich wannabe cried to bearded henchwoman Ethel (Kathy Bates) — Jimmy’s mother, by the way — that “it’s too late for me.” But, devoted to a fault, Ethel assured her that it wasn’t, and in fact, with the Tattlers now generating buzz for the show, it was only a matter of time before Elsa’s name was one of the household variety. Then, after Ethel left Elsa’s tent, the chanteuse unhooked and removed the prosthetic legs that we had no idea she had been wearing all along.

OK, your turn. What did you think of the premiere? Will Twisty leave you tossing and turning tonight? And how fast will you be heading to iTunes to see if Lange’s “Life on Mars” is available? Grade the episode below and then elaborate in the comments!