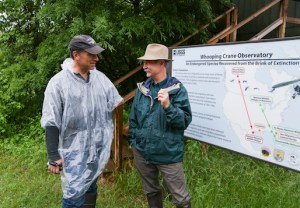 After seven years of rolling around in the muck, Dirty Jobs‘ Mike Rowe is cleaning up his act.

His new gig, CNN’s Somebody’s Gotta Do It, is decidedly less messy than his popular Discovery Channel series, which was cancelled in 2012. But the spirit is the same: The first episode — which airs Wednesday at 9/8c — manages to squeeze Rowe into a wetsuit and dangle him 30 feet from a Vegas theater’s ceiling to illustrate a former stagehand’s passion for production.

The hour-long premiere also includes a visit to a Missouri hair museum; the second episode introduces a man “who’s dedicated his life to saving the whooping crane, which involves me wearing a burka for about half a day, whispering, chasing these little bastards through the woods,” Rowe tells TVLine. “It’s very weird.”

We talked to Rowe in advance of his return to cable because, well, somebody’s gotta do it. Read on for the details.

TVLINE | In Dirty Jobs, you and the crew always made it look like it was just you hanging out with the person who had the dirty job. There wasn’t a lot of interference. Though Somebody’s Gotta Do It is more about people’s passions than their jobs, the feel is the same.
It’s absolutely true, and thank you, because if this was Star Trek, our prime directive would be: Don’t bulls–t the viewer. I’m fond of saying we don’t do a second take. But the truth is, we really don’t do a first take. I mean, there’s always a behind-the-scenes camera that’s rolling. We call it the truth cam… That’s the camera if something really, really wonky happens, that’s what I’ll turn to, and that’s how I’ll talk to the viewer.

What really happened was I peed my pants a little 30 feet in the air and caused the PR guy to throw up in his mouth. It’s a better story.

TVLINE | Somebody’s Gotta Do It feels much more like short-form documentary than reality show.
You hit it right on the head. It’s a mix of documentary and looking back after you shoot it to say, ‘Okay, I know what I want it to do, but what really happened?’ You know the story you want to write, but all of a sudden, what really happened in that interview? I think I’ve got to go another way.

TVLINE | Has CNN vetoed any ideas you’ve wanted to pursue?
That happened a lot with my last gig because, with Dirty Jobs, there was a real penchant to stay very, very literal to the title. If there wasn’t an exploding toilet or just a river of s–t somewhere, people got nervous. And that’s fine. You know, I mean it’s important to have a consistent brand, but I also wanted to work on a much broader palette.

It’s very hard to say, “No, that’s a bad idea” to Somebody’s Gotta Do It, because it’s really not about the idea or the story: It’s really about the person. And the big risk with this show is you don’t meet the people until I meet them. 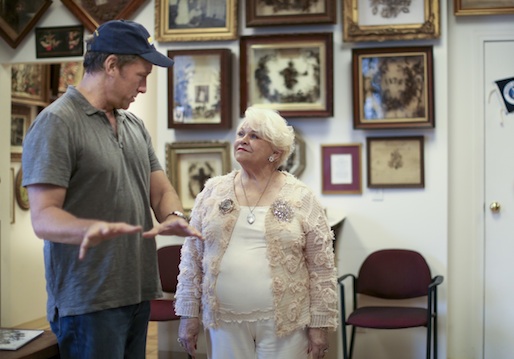 My favorite moment in that first episode isn’t really within either story. It’s when I’m in Kansas City — you don’t see this, but I had just given a speech at a thing called SkillsUSA, and we hop on Facebook and I say, “I’m in Kansas City. Who’s gotta do it?” We get 3,000 replies…. And here’s a woman saying, “You gotta go to the Hair Museum in Independence, Mo.”… One thing leads to the next, and now I’m standing at a strip mall in front of a hair museum.

She turned out to be a home run. Sweet little old lady, dedicated to dead people’s hair. And you know, there’s a sentence you probably didn’t think you were going to hear today, and I didn’t either, but there we are.

People find what they look for. And people will watch the hair museum [segment] and go, “Oh, my God, she’s half a brick shy.” And other people will look at it and go, “You know what that woman is? She is a living social anthropologist who is tapped into a really important pastime that two generations ago was common knowledge and today is all but forgotten. So she’s a custodian of the past.” Or she’s a Fruit Loop. I don’t know. You get to decide. 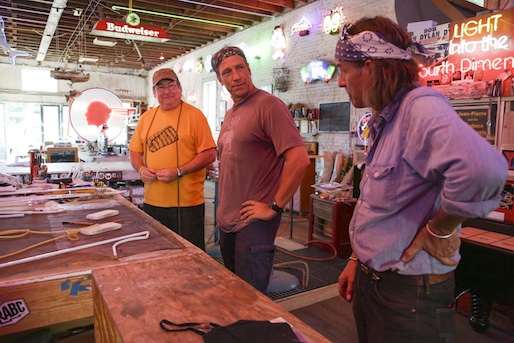 TVLINE | How many episodes do you have in the can?
We shot fast and furious for about three months. We’ve got at least eight that are done, and we’ve probably got enough footage for that many more. We’re just starting to assemble the next batch.

TVLINE | The way I got into watching Dirty Jobs was through those weekend marathons on Discovery Channel.
Oh, God. They still do it.

TVLINE | But marathons aren’t the kind of thing CNN tends to do.
Breaking news is their bread and butter. I don’t think you’re going to see a marathon of Parts Unknown, Inside Man, Lisa Ling’s show, my show. That would be extraordinary… I’ve got mixed emotions you know. [Marathons] would be great on the one hand, but on the other hand, I don’t know. News is kind of important.