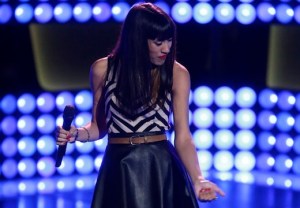 Let the bloodletting and chaff-separating begin!

Tonight’s final installment of The Voice‘s Season 7 Blind Auditions was about as strong as a freshly-hatched chick trying to budge an anvil — side note: I need an inspirational poster with that exact visual — and whet my appetite for the rapid-fire eliminations of the Battle Rounds.

That opera singer’s son whose rendition of “Secrets” was like a vanilla cookie — minus the vanilla? Cannon fodder, I tell ya! The teenage swim instructor who clearly didn’t understand a single word of Macy Gray’s “I Try”? Destined for the Dumpster! (Side note #2: That’d be a kick-awesome name for a punk band.) The 15-year-old boy without a single musical reference pre-dating N’Sync’s “Bye Bye Bye” video? Bye, bye, bye, kiddo! (Sorry, that was too easy.)

I know I sound like Grampy McGrumperson, but this was by far one of the weakest groups of chair-turning auditions in Voice history — and to be honest, the lack of depth in the roster of 48 remaining contestants has me a little troubled about what’s to come as a nation’s thoughts turn to turkey, stuffing and cranberry dressing. (Spoiler alert: My stomach just growled.)

Enough about my recent adventures in low-carb eating, though, let’s count down the eight vocalists who advanced tonight to the Season 7 Battle Rounds — in order from least- to most-promising:

8. Fernanda Bosch, “I Try” (Team Blake) | Fernanda took violent liberties with Macy Gray’s gorgeous melody — and not one of ’em communicated the kind of angst and longing that the lyrics require. Unacceptable!

7. Ryan Sill, “Secrets” (Team Gwen) | While Gwen at least acknowledged Ryan’s performance contained “some little wobbly parts” (which in Voice-speak, translates to “half your notes were flat”), the bigger problem was that the kid’s tone and stage presence had all the distinctiveness of a base coat of primer on a soon-to-be-beige living-room wall. Hopefully his college is holding his place for him during his certain-to-be-brief reality-competition sojourn.

6. Justin Johnes, “Let Her Go” (Team Blake) | Cute kid, yeah, but is there anyone in America* who wanted Passenger’s folk-rock smash to be placed in the TARDIS, sent back to 1998 and given the full boy-band treatment (now with 15% more nasal ad libs)? (*Other than Blake Shelton, of course.)

5. Mayra Alvarez, “Human Nature” (Team Gwen) | Mayra has a reasonably pretty, lilting tone — that can’t be denied. But her twist on “Human Nature” was so lethargic and oddly phrased that I actually wondered if Gwen and Blake decided to engage in some old-fashioned (and quite funny) trash talk just to make the time pass more quickly.

4. Griffin, “It’s a Beautiful Day” (Team Pharrell) | The judges went gaga over Griffin’s ability to slay the low notes of Michael Buble’s sweet ditty, but to my ears, there was a sloppiness to his delivery, a lack of articulation at the ends of key lines and phrases, that made his rendition more of a shoulder-shrug than a get-up-and-cheer situation.

3. Matt McAndrew, “A Thousand Years” (Team Adam) | Andrew definitely possesses a unique, plaintive voice — but a voice that occasionally veered into unpleasing territory when his nerves kicked in and caused an excessive amount of quaver. How Matt resisted Pharrell’s “you are the subject of this painting” pitch, however, makes me wonder if he is truly ready for the big dance. #justsayyestopharrellpeople

2. Beth Spangler, “Best Thing I Never Had” (Team Adam) | Beth was good — maybe not Four Chair Turn-level good — but then again, you’ve got to give some props to anyone brave enough to tackle a fairly recent and very booming Beyoncé ballad. If Adam is able to help her polish her slightly overshot ad-libs — and she promises to never again wear leather bib overalls — she could be a contender.

1. Brittany Butler, “The Girl from Ipanema” (Team Pharrell) | There was a blowsy broad quality to Brittany’s inflections that might’ve been irksome on a lesser singer. But the rough edges to the funky chick’s vocals proved a delicious combination with her jazzier tendencies. I honestly can’t wait to see her working with a coach like Pharrell, who’s made a career out of unexpected delights.

On that note, then I pass the mic to you. Who were your favorites from Season 7 Episode 5? Were you a little disappointed with the overall quality of singing? Take our poll below, then sound off in the comments!