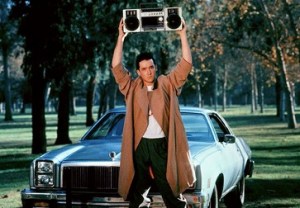 Here’s a present that’s way better than a pen: A Say Anything TV show!

NBC is developing a sequel series to the 1989 Cameron Crowe film that would catch up with Diane Court and Lloyd Dobler 10 years later, our sister site Deadline reports.

The single-camera comedy from writer Justin Adler (Better Off Ted) finds Lloyd single after long ago being dumped by Diane. His life hasn’t exactly turned out like he thought it would. But then Diane surprisingly returns home, inspiring him to “dare to be great” once again, win back his girl and reboot his life.

The project is being produced by Aaron Kaplan’s Kapital Entertainment and 20th Century Fox TV.

Are you excited to revisit Diane and Lloyd? Or are you heartbroken to imagine a future in which the two split?