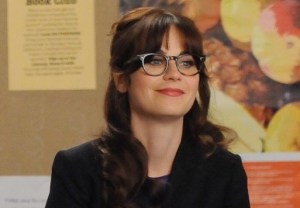 Jess doesn’t look super psyched in these exclusive photos from the Oct. 14 episode of New Girl (Fox, 9/8c), but she may want to just give it a minute.

Because eventually, she’s going to realize that Ryan, the new science teacher at her school, looks a lot like Julian Morris (Pretty Little Liars, Once Upon a Time) and that he’s poised to be a potential love interest for the quirky vice principal.

In the same episode, the loft gets a landline, which prompts a flashback to when Nick and Winston were teenagers. Don’t worry; we’ve got a shot of that here, too.

Scroll down to see Ryan drop some science on Jess and to witness Nick and Winston sport ’90s ‘dos. (It never gets old.)