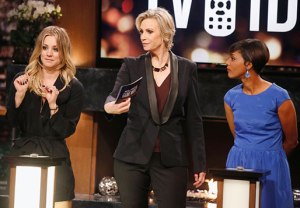 Breathe easy, lovers of fun: There’ll be plenty more Hollywood Game Nights in the near future.

NBC on Friday announced that the lighthearted series will return for a third, 10-episode season.

RELATED 2014 Renewal Scorecard: What’s Coming Back? What’s Getting Cancelled? What’s on the Bubble?

Jane Lynch, who in August won an Emmy for hosting Game Night, also will be back as emcee.

According to the network, the series averaged 5 million viewers overall during the 2013-14 TV season.

There is no word at this time regarding a premiere date, though the smart money says it will be scheduled opportunistically, as it has in the past.