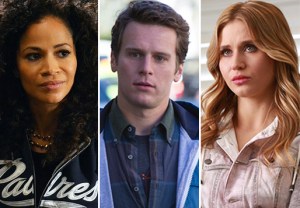 GLAAD on Wednesday released its Network Responsibility Index, an annual study of LGBT representation on television. For the first time, three networks were awarded the grade of “Excellent.”

ABC Family, HBO and MTV all earned top marks, making this the first time the LGBT advocacy group has awarded that high honor to three networks. Achieving an “Excellent” grade will be more difficult in the future, however, as networks will now be required to include significant content with specifically transgender characters in order to be eligible.

Moving down the line, ABC, The CW, Fox, NBC, FX and Showtime are all ranked as “Good,” while CBS, TLC and USA are simply “Adequate.”

And most in need of improvement are A&E, History and TNT, all of which fall under the “Failing” category.

GLAAD also released this year’s “Where We Are on TV” report, which tracks the exact number of regular and recurring LGBT characters on television. According to the report, 3.9 percent of broadcast TV characters played by series regulars will be LGBT. Though this is up 0.6 percent from last year, it’s still shy of 2012’s 4.4 percent.

Among broadcast networks, Fox had the highest percentage (6.5) of LGBT characters, including those on freshman series Gotham and Red Band Society and the upcoming Mulaney, Backstrom and Empire. ABC, which tied for first last year, slipped a spot, with 4.5 percent, followed by NBC (improving on 2013’s last-place finish, with 3.8 percent), CBS (3.2 percent) and The CW, which counts zero LGBT characters among its 89 series regular roles.

On the cable front, HBO came out on top, with 15 regular or recurring LGBT characters current or expected. ABC Family and Showtime account for 13 each, followed by Syfy (11), FX (10) and MTV (8).

To see the complete Network Responsibility Index and “Where We Are on TV” report, head to GLAAD’s official website.