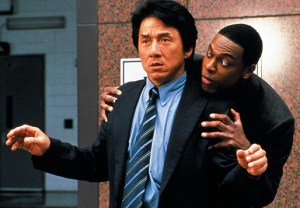 Please try to understand the words that are coming out of this article.

An hourlong action-comedy series based on the Jackie Chan/Chris Tucker franchise Rush Hour is currently in the works from Warner Bros. TV, our sister site Deadline reports.

The project will reportedly be co-written and executive-produced by Bill Lawrence, with Arthur Sarkissian and Brett Ratner — the director of the franchise — also on board to executive-produce.

The Rush Hour movies follow Detective Inspector Lee (Chan) and Detective James Carter (Tucker) as they team up to solve various crimes. Three films have been made so far — in 1998, 2001 and 2007, respectively — with a fourth installment reportedly in the works.

UPDATE (9/2/14): Rush Hour has received a pilot production commitment from CBS, per Deadline. This means a pilot will definitely be made for the network, but a pick-up is not necessarily guaranteed.

Thoughts on this potential series? Any casting suggestions? Drop ’em in the comments section below.