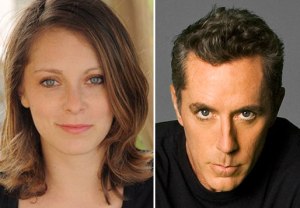 When Showtime’s Crazy Ex-Girlfriend moves to California on a whim, at least she won’t be alone.

The cast of the upcoming musical-comedy pilot was announced Tuesday, via a video on star Rachel Bloom’s YouTube page.

In addition to Bloom (Robot Chicken) — whose impulsive Rebecca gives up her successful life and job in Manhattan to look for love in California — the half-hour pilot will also feature four series regulars:

Crazy Ex-Girlfriend will begin filming in Los Angeles in October.

Watch Bloom’s video announcement below (language NSFW!) to get a good look at the cast, then hit the comments with your early thoughts on the pilot.