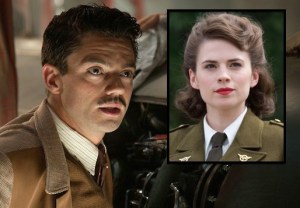 As anticipated — yet still worth noting — Dominic Cooper is set to reprise his Captain America film role as Tony Stark’s father on ABC’s Marvel’s Agent Carter.

Marvel.com was first to report the news.

Cooper originated the role of Howard Stark in 2011’s Captain America: The First Avenger, then reprised it for the DVD featurette Marvel One-Shot: Agent Carter. The Brit’s previous TV credits include the miniseries Fleming and Sense & Sensibility.

An eight-episode midseason drama due to claim the Tuesdays-at-9 time slot during Agents of S.H.I.E.L.D.’s winter hiatus, Marvel’s Agent Carter is set in 1946, where its title character (played by Hayley Atwell) is balancing administrative duties at the SSR (Strategic Scientific Reserve) with secret missions for Howard Stark — all while trying to navigate life as a single woman, in the wake of losing the love of her life, Steve Rogers aka Captain America.