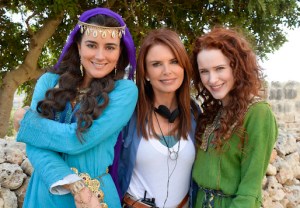 Like the swallows to Capistrano, the beloved Cote de Pablo is returning to CBS — and we’ve got your first look at the NCIS alum in The Dovekeepers.

The video below shows de Pablo on the set of the Eye Network’s miniseries, an adaptation of Alice Hoffman’s historical novel about four women in ancient Israel whose lives intersect at the siege of Masada. That real-life event occurred in 70 C.E. (aka A.D.), when 900 Jews who’d been forced out of Jerusalem by the Romans held out for months against Roman troops at a mountain fortress in the Judean desert.

The Actress Formerly Known as Ziva plays Shirah, a “sensual, mysterious and fiercely independent single mother” whom many call the “Witch of Moab” because she practices forbidden magic.

The Dovekeepers will air on CBS in 2015. Press PLAY to see de Pablo in action and get a hint of what’s to come.