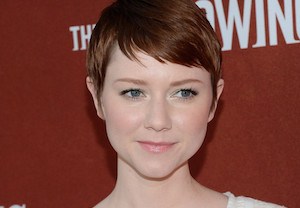 House of Lies is resurrecting one of Joe Carroll’s deranged acolytes.

The Showtime dramedy has tapped Valorie Curry (AKA The Following‘s late Emma Hill) to join the Season 4 cast in a recurring role, TVLine has learned exclusively.

Curry will play Kelsey, a computer code writer who has all the weird, hours-alone-at-the-screen aloofness the job suggests. She’s smart, socially awkward, but confident in her coding prowess. A bit intimidating and intriguing in the way she’s unlike the usual business types. Kelsey finds it hard to suffer fools and anyone who doesn’t respect the technology she creates.

What’s her connection to the pod, you ask? She works in their office suite.

In other House of Lies news, TVLine has confirmed that actor-comedian Demetri Martin will also recur in Season 4 as a maverick inventor who forms a business relationship with Don Cheadle’s Marty. (Martin’s casting was scooped by The Hollywood Reporter.)

House of Lies‘ fourth season will bow in early 2015.