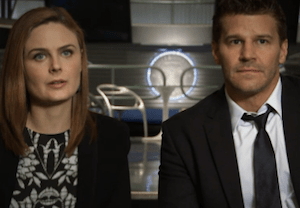 The following story contains major spoilers from the Bones premiere, so, if the episode is still sitting on your DVR (or you reside on the West Coast), you best steer clear.

In the following exclusive video, Taylor and her fellow Bones cohorts — including series leads David Boreanaz and Emily Deschanel — reveal how they reacted to the deadly turn of events, lament the departure of their longtime colleague, and preview the difficult road ahead for those Sweets left behind.

Press PLAY below to watch the cast bid farewell to both Daley and Sweets, and then hit the comments with your own eulogies.