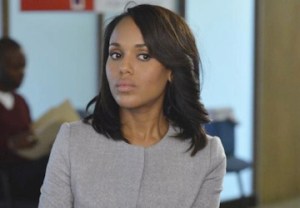 Scandal‘s Season 4 premiere had a lot to accomplish — revealing where Olivia vanished to, giving her a compelling reason to return home, presenting a D.C. that’s different (yet familiar enough) to the one she left, and then convincing not just us and Jake but Olivia herself why she needed to stay for not “a couple of days,” but Gladiate once again.

VIDEO Scandal: Would Fitz Risk It All For ‘One Woman’? (Spoiler: Yes!)

For starters, we learn that Liv — sorry, “Julia Baker” — and Jake have spent the past two months living on an island “off the coast of Zanzibar,” where they read Gone Girl, round third base surfside and get supplies brought to them by boat. Until one day, their delivery includes a letter informing Liv that Harrison is no longer missing, but found dead.

The two dart back to D.C. (with a stop for a hair-straightening along the way?) for “a few days, in and out,” Liv promises, to plan Harrison’s funeral. But the other Gladiators have scattered, some almost unrecognizable. Huck is now “Randy,” a “smart counter” clerk at an electronics store (and he doesn’t speak to Quinn anymore); Abby is the White House press secretary, where she fends off grumbling from both sides of the aisle about “Fitz 2.0” (and labors to keep Crazy Mellie, as Twitter has already branded her, under wraps, what with her Uggs, Fruit Colored O’s, day-old shirts and circa-1976 unwaxed wazoo).

Visiting the shuttered OPA office, Liv learns from Quinn — who has seemingly mellowed from the wild child she evolved into over Season 3 — how she was tracked down, thanks to her penchant for “rare, complex” wines.

Olivia makes the rounds, only to learn that Huck won’t have anything to do with her if she’s not staying for good. Abby meanwhile is full of fire, launching into a speech about how Liv might have saved Harrison’s life if she stayed longer, cared more. Liv blows up at that assertion, arguing that Abby abandoned the team as much as she did.

Jake checks in on David, who has done nothing with the B613 files bequeathed to him, seeing as his color-coding system revealed them to either be “Scary, Very Scary or Wait for Someone to Come Kill You Scary.” Olivia’s next stop, meanwhile, is to see her father, who invites her to “ask me” about any role he had in Harrison’s death, though he claims none. “I did however take care of your mother,” Rowan sorta-lies, obeying a direct order from POTUS. Else the world might learn that the president’s mistress’ mother murdered the First Son.

That night back at Olivia’s apartment, funeral planning is interrupted by a visit from a young woman named Kate, the aide to Senator Vaughn. “I think I killed Senator Sterling,” Vaughn tells Liv over the phone. Vaughn claims that Sterling attempted to rape her, during a discussion about Fitz’s Equal Pay bill, when she fought him off, sending him flying over a railing (though not to his death). Liz at first hands the case off to a lawyer pal, but upon realizing that Vaughn was covering for Kate — whom she purposely “dangled” in front of Vaughn, knowing his “type” — and after discussing the issue mid-foreplay with a frustrated (yet apparently quite sexually capable) Jake, Liv elects to represent the young woman.

At 1600 Penn, Cyrus is fending off barbs from “Lizzie Bear,” the new RNC head (played by Portia De Rossi), who says the party is getting impatient with Fitz’s polices and “across the aisle” antics — including the possible nomination of a Democratic Attorney General.  Perhaps deciding to go with a devil he knows, Cy invites David Rosen to consider the plum position. David suggests to Abby that she blabbed about him having the B613 files, that Cy is out to buy his silence. Abby is affronted by the intimation, then carps that David’s obsession with the B613 files blew up their relationship. “if you want to change the world,” be Attorney General, she states. “Get yourself some power, and use it.”

After chiding Abby for not telling him as soon as she heard, Cyrus loops in Fitz on Olivia’s return. When Fitz asks if she’s staying, Cy responds with what was as much as sigh as a sentence: “You want to pretend we all don’t know how this movie ends?”

Ultimately we get to the funeral, an extremely quiet affair attended by just the Gladiators, arriving one by one, and Jake. Rose petals are scattered, tears are shed, a gospel cover of “Bridge Over Troubled Water” plays… and then Jake, whilst hugging Liv, spies Rowan, of all people, eavesdropping on the ceremony.

In the penultimate scene, on a White House balcony, Mellie jokes about how she couldn’t leap to her death if she wanted to — “I’m not gonna try to kill myself. I’m not you,” revealing that Fitz at some point after Jerry’s death “had one bad night” where he looked to end it all. When Fitz commands his Mrs. to never bring that up again, Mellie adds it to “the list,” alongside Jerry’s death, his missing mistress and her own rape.

And as the hour closes, Jake is recapping his and Olivia’s flight plan back to the island when it becomes clear their plane seats will go unused. “Are we Gladiators or are we bitches?” is what Liv says Harrison would argue in this situation. And during a final montage, Fitz nominates David for AG, Liv gives a rousing presser on behalf of Kate (effectively clinching the Equal Pay bill in the process) and, as they pass by each other in a rotunda, Liv and Fitz reach pinkies at each other but miss, though each seemingly sensing the effort was mutually made.