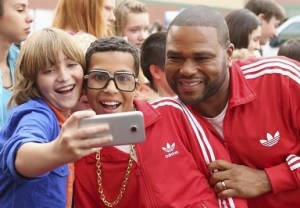 The new comedy black-ish premiered on Wednesday night to 11 million total viewers and a 3.3 rating (per finals), demonstrating 96 and 85 percent retention out of Modern Family (11.4 mil/3.9, down 3 and 7 percent from a year ago). For comparison’s sake, Super Fun Night a year ago only managed 75 percent retention.

Opening ABC’s night, The Middle (7.6 mil/2.2) ticked up from its May finale but was down 16 and 12 percent from its previous premiere. With its second-best tallies ever, The Goldbergs (7.3 mil/2.4) built on The Middle‘s demo number, was up two tenths from Back in the Game‘s year-ago rating and greatly improved on Suburgatory‘s most recent delivery (5.2 mil/1.6).