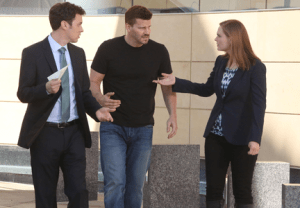 Dr. Lance Sweets has come a long way since his early days as Booth and Brennan’s quasi-couples therapist on Bones, and the following exclusive video chronicles the character’s journey from annoying shrink to close confidante to special agent to (as revealed in tonight’s Season 10 premiere) father-to-be.

“Early on, Booth looked at him like this little kid who was… a bit annoying,” relates Boreanaz of the show’s unlikely bromance. “But their relationship has gotten much stronger. Booth has become more attached to him as a friend.”

That strengthening bond is evident in tonight’s opener (8/7c, Fox) when Booth expresses gratitude to Sweets for looking after Brennan and Christine during his three-month stint in the pokey.

Also in the below video: A longer peek at the priceless moment Booth learns that Sweets is going to be a father.