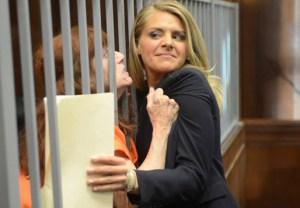 When it comes to Nina Whitley, the manic lawyer at the forefront of USA Network’s upcoming comedy Benched, there’s only one way to truly describe her: She’s “like one of the ‘before’ women in a tampon commercial.”

Sure, Nina’s a little spastic at times — like when she curses out a locked door, or when she threatens to gut someone like a fish and use their skin as a shower curtain — but aren’t we all works in progress?

You know what, it’s probably just best if Coupe explains the series herself. So hit PLAY on the preview video below, then drop a comment: Will you be watching Benched next month?