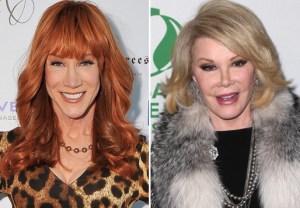 When Joan Rivers passed away earlier this month, she didn’t just leave a Joan-shaped hole in our collective heart — she also left a vacant seat on the set of E!’s Fashion Police. So… who will take her place?

Comedian Kathy Griffin is currently a frontrunner to succeed the late Rivers, according to The Hollywood Reporter, with several other names also being considered.

Whoever is ultimately chosen to fill the slot, at least they’ll have plenty of time to prepare; Fashion Police isn’t scheduled to return until Jan. 12, at which point the newly assembled team will skewer celebs’ Golden Globes looks.

Joan Rangers, how would you feel about Griffin assuming Rivers’ spot? If you’re against it, which replacement would you support? Cast your vote below, then drop a comment with your recommendations.