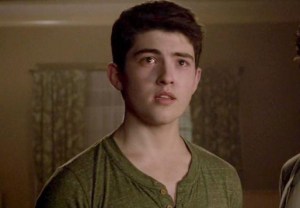 A fan-favorite Teen Wolf actor is about to discover the dark — and potentially deadly — side of selfies.

Ian Nelson, who recurs as the younger version of Tyler Hoechlin’s Derek Hale on the MTV drama, will appear in a Season 10 episode of Criminal Minds, TVLine has learned. Nelson will play an emotionally complex teen unnerved by taunts he and his friends receive in the form of morbid selfies posted online.

* NBC is developing a new comedy based on Val Kilmer’s 1985 movie Real Genius, our sister site Deadline is reporting. The series would follow the exploits of a brilliant extrovert and his socially inept co-worker.

* Christina Applegate (Up All Night, Married With Children) will appear in multiple episodes of Showtime’s Web Therapy as a Boston-based “fixer” who reaches out to Fiona (Lisa Kudrow) to offer damage-control services after the NSA scandal, according to EW.com.

* AOL has announced the fall premiere dates for its 2014 programming slate: Laugh Lessons With Kevin Nealon, in which seasoned comedians teach comedy to kids, premieres Oct. 6; #Candidly Nicole, which follows the everyday exploits of Nicole Richie, returns Oct. 9; True Trans With Laura Jane Grace, which tells the real-life stories of transgender Americans, premieres Oct. 10; Future Stars Here With @TiffanyShlain, which explores what it means to be human, returns Oct. 23; and My Hero, which finds celebrities going back into their pasts to honor someone who changed their life, premieres Oct. 24.