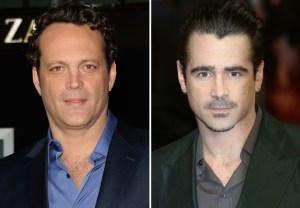 You can stop tweeting dream-cast pairs: HBO on Tuesday announced that Vince Vaughn and Colin Farrell will lead Season 2 of True Detective.

Vaughn (Wedding Crashers), whose interest in the project TVLine exclusively reported in August, will play Frank Semyon. Frank is a career criminal whose move into legitimate enterprise is jeopardized when his business partner is killed.

Farrell (Alexander) will play Ray Velcoro, described by the network as “a compromised detective whose allegiances are torn between his masters in a corrupt police department and the mobster who owns him.” (Word of Farrell’s casting circulated ahead of HBO’s announcement, thanks to an interview the Dublin-born actor gave an Irish newspaper.)

The series’ official synopsis? “Three police officers and a career criminal must navigate a web of conspiracy in the aftermath of a murder.”

Other actors whose names have been bandied about for the anthology series’ second season include Mad Men‘s Elisabeth Moss and Friday Night Lights alum Taylor Kitsch.

Production on the eight-episode series will begin this fall in California, with Justin Lin (Community, Fast & Furious) directing the first two hours.