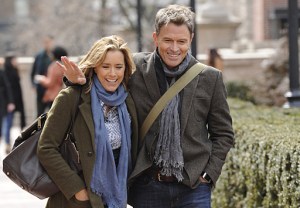 With the final numbers now in, CBS’ Madam Secretary premiered on Sunday night to 14.8 million total viewers and a 2.0 demo rating — improving upon The Amazing Race‘s year-ago audience by 65 percent and matching the demo delivery of the reality vet.

TVLine readers gave the series premiere an average grade of “B+.” UPDATE: CBS will encore Madam Secretary this Saturday at 8/7c.

Leading out of that — at a few minutes past 10 pm for Eastern/Central time zones — The Good Wife‘s great season opener (average grade “A-“) retained 11 mil and a 1.4, up in eyeballs but down a tenth from its previous premiere, yet up from its May finale (9.1 mil/1.2). That marks TGW’s largest premiere audience since 2011.

Stalwart 60 Minutes opened the Eye’s night with 17.9 mil/3.5, up hugely from a year ago and — if the numbers come at all close to holding — marking seven- and nine-year highs.