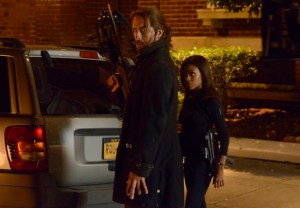 Leftenants, it’s time to get back to duty.

After a nearly eight-month hiatus — a long wait, even if you weren’t trapped underground and/or stuck in a hell dimension — Fox’s Sleepy Hollow returns tonight (9/8c) with an episode that answers the questions left dangling by last season’s finale.

How’s Abbie going to escape Purgatory? Will Ichabod find a way out of the coffin in which Henry buried him? Did Jenny survive her car crash? And is Katrina really, truly part of the 21st century now?

To find out, we gathered the show’s stars and executive producers in a Thomas Jefferson-designed room, chained them to the walls and shone high-powered UV light on them until they spilled all the series’ secrets. (Just kidding: We merely asked nicely.)

Read on to find out what Tom Mison, Nicole Beharie, Lyndie Greenwood, Mark Goffman and Ken Olin had to say about the Witnesses’ journey in the coming weeks.

THINK OUTSIDE THE BOX | Goffman is aware of fans’ theories that Ichabod is going to use Abbie’s phone to help free him from his predicament, but “I don’t think anyone is going to guess how he gets out,” he says. “We worked very hard to come up with ideas that would be incredibly difficult, both to execute and to see coming.” When pressed, the EP cagily adds that Crane “has a lot of skills that sometimes people today don’t have, just by virtue of the fact that he was alive 250 years ago, when people had to do more with less and didn’t have access to modern conveniences.” Or, as Mison jokes, “Put MacGyver in period costume…”

LIFE IN HELL | While Ichabod tries to make his way to the surface, Abbie labors to find a way out of Purgatory without drawing Moloch’s attention. It doesn’t help that the demon realm seems determined to mess with her head. “Of course there’s going to be a little bit of a mind-trip thing happening,” Beharie notes, hinting that everything may not be as it first appears during the Season 2 debut. “Hopefully, we can catch people off guard.” Goffman raises the idea that what Mills see may not be exactly what she gets, because Purgatory “plays on your fears and desires to create a reality and basically tricks you to a point where you lose yourself,” he says. “Abbie is in real danger, not just physically, but emotionally.”

THE MOTHER LODE | The premiere doesn’t feature Aunjanue Ellis (The Mentalist) as Abbie and Jenny’s mom, but Olin says Lori Mills’ time is coming. “We learn the reason for a lot of her troubles, and they’re surprising because they really do tie back into the entire world of Sleepy Hollow and what Crane and Abbie are about.” He adds, “We learn something about what she did and who she was involved with, what her struggles were and where the mental illness stems from. That’s a twist.”

RELATED Matt’s Inside Line: Scoop on Sleepy Hollow and More

ALL ABOUT THE BENJAMIN | You may have heard that Ichabod doesn’t hold Benjamin Franklin (played in flashback by thirtysomething‘s Timothy Busfield) in very high regard. Or, as Olin says with a huge smile, “Crane can’t stand him. That’s the great thing. It’s very fun, because Crane is so proper and sanctimonious in a certain way, and Benjamin Franklin is so irreverent and so badly behaved.” Olin also teases that the Founding Father’s famous kite experiment may not have been about electricity, after all.

SISTER SORROW? | If you’re wondering if Jenny lives… we’re not allowed to tell you. Sorry! But we can say that we talked with Greenwood, and she said this of her battered-and-bruised alter ego: “She can’t catch a break. But, to be fair, neither can anyone else on the show!”

CAPTIVE KATRINA | Ichabod’s wife certainly isn’t pleased about being Headless’ prisoner, but Winter says you shouldn’t be surprised if the witch softens a little toward her captor. “The more time she spends with him, there’s things she sees that he does for her. She comes to realize that he actually does love her, in a weird way.” Mison adds that knowing Mrs. Crane is in the clutches of her former fiance will infuriate the normally level-headed Ichabod. “That’s what makes this season a brilliant progression from where we left off, because he has to fight against a situation that would naturally make you boil emotionally,” the actor says. “He has to put a lid on it and think.”