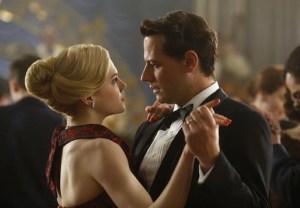 Every time he dies, Forever‘s Dr. Henry Morgan comes back to life. But will you come back for more of ABC’s newest drama?

Before you answer, a brief recap:

We meet Henry (Ringer‘s Ioan Gruffudd) as he’s chatting up a pretty Russian woman on a New York City subway. But just as they’re making plans to hang out, the car jumps the track and crashes, killing nearly everyone on board — including the good doctor.

Turns out, this is nothing new for Henry, who first died 200 years ago when he was shot and pushed off a ship for trying to save the life of one of the slaves in the hold. “Something happened that night. I was transformed,” he says via voiceover, going on to explain that he always returns from death naked and that the resurrection always occurs in water. Even more puzzling: He has no idea why.

The only one to know his secret is a pal, Abe (Taxi‘s Judd Hirsch). To everyone else, including Henry’s co-workers at the New York City Medical Examiner’s Office, he’s merely a very talented M.E. It’s at the morgue that Henry meets Det. Jo Martinez (Alana de la Garza, Law & Order), a recent widow and New York City cop who’s investigating the subway derailment.

A mysterious caller to the morgue lets Henry know that his secret is out: A man claims to know about his immortality, making Henry demand that he and Abe leave town. But Abe won’t go, and eventually Henry agrees to stay put and fight back against the man threatening to expose him.

In flashbacks, we see Henry happily dancing with his wife Abigail, who apparently knows about his immortality, as well. “You were made like this for a reason,” she says, “but it wasn’t for me.” In the present day, Det. Martinez looks like the most likely bet for Henry’s love interest, though in the pilot, they merely work together on the subway case.

He helps her track the man behind the subway “accident” to the roof of Grand Central Terminal, where Martinez is shot and Henry jumps off the roof — with the man in tow — in order to save everyone in the building. When the detective comes to in a hospital room, Henry is there to explain that the crazy man threw himself off the roof. Any good feelings Henry has are obliterated when the mystery man calls again and indicates that he, too, is immortal — and that he and Henry are soulmates destined to spend eternity together.

Henry is a protagonist straight outta the Mentalist or Elementary playbook: super-observant, conflicted, rather hot. And having Hirsch’s Abe turn out to be a World War II refugee Henry raised is a nice twist. But the drama will need to use every minute of its lifetime — however long that may be — to avoid the fate of the similarly themed, short-lived drama New Amsterdam.

Did you like Forever? Grade the episode via the poll below, then back up your choice in the comments!