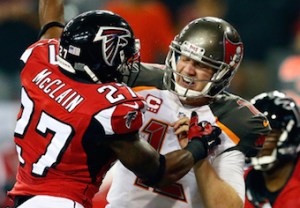 The Atlanta Falcons’ 56-14 blowout against the Tampa Bay Buccaneers put the hurt on Thursday Night Football‘s numbers, as well.

CBS’ broadcast of the game this Thursday drew 9.2 million total viewers and a 3.3 demo rating (per fast nationals), down 42 and 40 percent from last week’s prelim numbers.

Over on NBC, The Biggest Loser (4.6 mil/1.3) shed 15 and 19 percent from its season opener, hitting a series low, while a Mysteries of Laura pilot encore did 4 mil/0.8 (besting the night’s other five drama repeats).

NEXT THURSDAY: ABC’s Grey’s Anatomy, Scandal and How to Get Away With Murder, Fox’s Bones and NBC’s Parenthood all premiere.