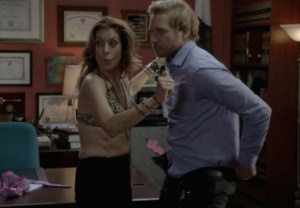 On NBC’s upcoming comedy Bad Judge (premiering Oct. 2 at 9/8c), Kate Walsh is enjoying the best of both worlds, working hard and partying even harder as the sexually unapologetic Rebecca. And when she’s not doing one of those two things, she’s hooking up with Veronica Mars‘ Ryan Hansen as her on- and off-again psychiatrist beau in TVLine’s exclusive first look.

“There’s part of [Rebecca] that’s still a college girl, partying, getting into trouble,” executive producer Adam McKay explains in the video below. “Then there’s another side of her that’s very grown up and that is a judge and, occasionally, surprises you by doing the right thing.”

Adds Walsh, who was eager to get back to her comedy roots, “She’s a little fantastic and kind of the best friend that you’ve always wanted and fabulous all at once.”

But Bad Judge‘s biggest selling point might be its homegrown origins. “This show is smart, sexy and made in the USA,” EP Will Ferrell says, while McKay (jokingly) points out that “we could have easily taken this show to China, cut down on our labor costs, cast Chinese actors who are very skilled.”