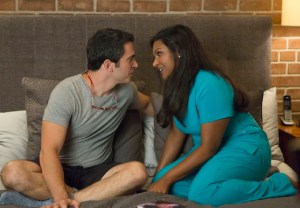 Mindy and Danny finished The Mindy Project‘s second season in rom-com bliss, wrapped in each others’ arms, sprawled on the observation deck of the Empire State Building. Happily ever after starts now, right?

Not so fast. As Season 3 starts (Fox, Tuesday at 9:30/8:30c), executive producer Matt Warburton says, the starry-eyed pair crash back to reality.

The Mindy-Danny embrace that ended Season 2 “was really exciting to people,” says executive producer Matt Warburton. But the challenges of dating a co-worker – particularly co-workers as quirky as Danny and Mindy – will provide plenty of fodder for the season ahead.

“They’re both equally weird,” he says, laughing. “The attraction is a puzzle to both of them on some level. The other thing that keeps it fun is they almost don’t agree about anything, so you never run out of things that come between them.”

Among those possible problem-causers: ever-present exes, Mindy’s inability to stop meddling and the much-heralded Mama Castellano. Read on as Warburton gives TVLine the scoop on the premiere and beyond.

RELATED The Mindy Project: Shonda Rhimes Is a [Spoiler] Champion!

BOW-CHICKA-WOW-WOW | Warburton previously said that Season 3 “is probably our dirtiest season,” and the first episode certainly backs up that sexy hypothesis. (The last two minutes, in particular, are likely to give your DVR’s rewind button a workout.) “There is a moment in the premiere that will hopefully blow people’s minds in that regard,” he adds. “Chris Messina is capable. He’s a versatile guy, and we’re going to go as far as we can push him. The fact that he was willing to do what we asked him to do – and you’ll see what I mean when you see it – was kind of incredible.”

ALL BETTER | Remember how Danny was hit by a cab on his way to the Empire State Building? “He has some broken bones and stuff, but he had the summer to recover and for Mindy to accommodate that, sexually, in their lives,” Warburton jokes.

OUTTA MY WAY | Though Drs. L and C spend a lot of time together, they don’t live together… yet. “In the old days in the show, they always had somewhere else to go. When they were annoyed by each other, they could go home. They can’t do that anymore, because they’re always over at each others’ apartments or they’re at work,” he says. “Basically, it’s just increased the number of battlefields for them to have disagreements in.”

UNHAPPY RETURNS | “Nothing makes Danny more uncomfortable than being reminded about Mindy’s past,” Warburton teases, adding that Lahiri exes Cliff and Brendan Deslaurier still have offices in the building and will be on screen this season. “Danny’s surrounded, absolutely.”

TRANSFERRENCE | Though she’s not the third part of a “pretty sticky love triangle” involving Peter and Jeremy, Mindy “is definitely going to have a lot to say” about it,” Warburton previews, “which just causes everybody a lot of headache.” ROUGH GOING | Morgan and Tamra are “giving us the freedom to have the most rocky relationship that we have on our show,” Warburton says with a laugh. “But we have to be good to Morgan, because I think people don’t want to see a sad puppy dog, and that’s what Morgan is a lot of the time.”

SLAMMER FAMILY | Complicating things for Nurse Tookers, his recently sprung jailbird cousin Lou (played by It’s Always Sunny in Philadelphia‘s Rob McElhenney) will show up to be a bad – albeit funny – influence. Lou, who has a “Don’t Kill People” tattoo on his belly, is “someone who can actually get Morgan to backslide a little, which is fun to get to see Morgan do,” Warburton says.

MAMA’S HOME | Though she doesn’t show up in the premiere, Warburton gushed about Cheers alum Rhea Perlman as Danny’s mom, Annette Castellano. “You won’t believe how good she is,” he says. “It’s stunning.”