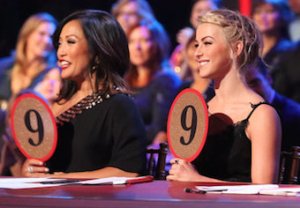 ABC’s Dancing With the Stars kicked off Season 19 on Monday with 13.6 million total viewers and a 2.4 demo rating (per finals), topping the night on both counts yet down 16 and 23 percent year over year and hitting a demo low for a premiere.

Over on CBS, the penultimate Under the Dome (7 mil/1.6) rose 5 percent and two tenths, hitting four- and six-week highs.

RELATED Under the Dome Recap: Honey, We Shrunk the Dome

NEXT MONDAY: Fox’s Gotham and Sleepy Hollow, CBS’ The Big Bang Theory and Scorpion and NBC’s The Voice and The Blacklist all premiere.