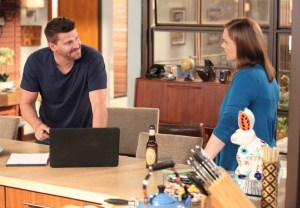 Will a dramatic change of scenery exorcize the demons currently haunting Booth? That’s a question Brennan will be asking herself when Bones kicks off its 10th season next Thursday (8/7c on Fox).

In the wake of the deadly shooting rampage at the couple’s old abode, a kerfuffle that landed Booth in prison for four months, Brennan took it upon herself to unload their terror-tinged crib, purchase a brand new abode and furnish and design the hell out of out of it.

“The idea of moving back in [to the old house], even if it was repaired, was not an option,” explains exec producer Stephen Nathan. “Brennan, knowing that somehow they would free Booth, found a house for them, one that would reflect Booth.”

Scroll through the exclusive gallery below (directly beneath the new Season 10 advertising art) to see the results of the Brennan’s four-month passion project, and then hit the comments with an answer to this question: Love it or list it?!